A firm stance on fighting inflation from Jackson Hole pushed markets lower as investors wrestle with the impact on the global economy.
August 2022 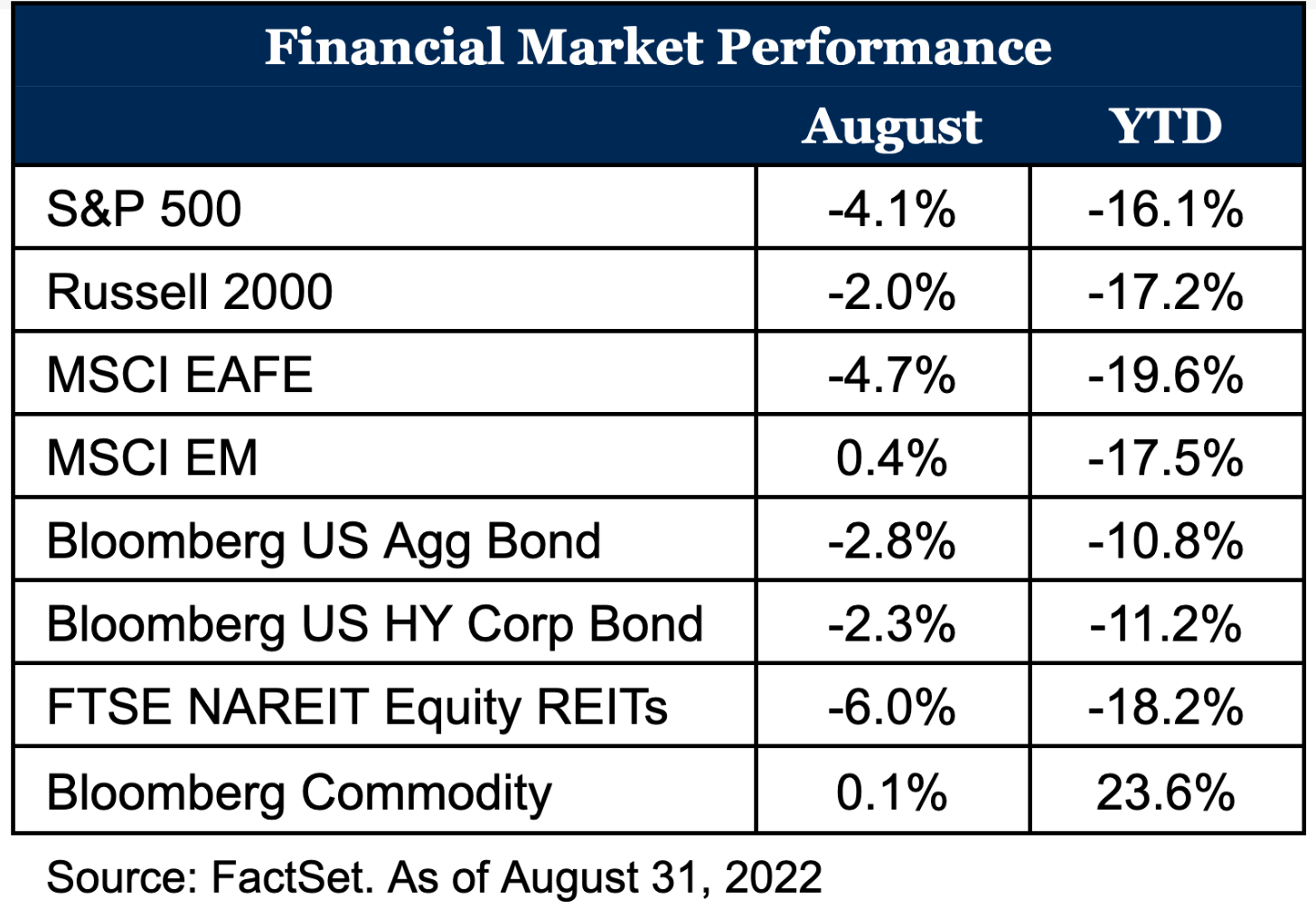 For much of August, markets were heating up in the wake of a relatively favorable earnings season. But, much like a child’s summer ends with a new school year, the August rally ended following the Jackson Hole Economic Symposium in the second to last week of the month. Federal Reserve Chairman Powell said “we (the Fed) will keep at it until the job is done” followed by his view that bringing inflation down will “require a sustained period of below-trend growth.” These comments spooked markets and all but ended the market narrative of a pause in rising interest rates. The perceived increased likelihood of a recession as a result of Powell’s comments drove equity markets lower in the last two weeks of the month. Leading indicators are flashing warning signs as well. The U.S. Treasury curve remains inverted, and the Conference Board’s LEI Index was flat year-over-year for the most recent July reading – historically, the index has crossed into negative territory preceding a recession, but there have been “false positives” as well. Despite market concerns and the recent down draft in equities, we have seen recent economic data remain positive. Consumer confidence in August rose compared to July and ISM data indicates both the manufacturing and services sectors remain in expansion territory, albeit at a slowing rate. 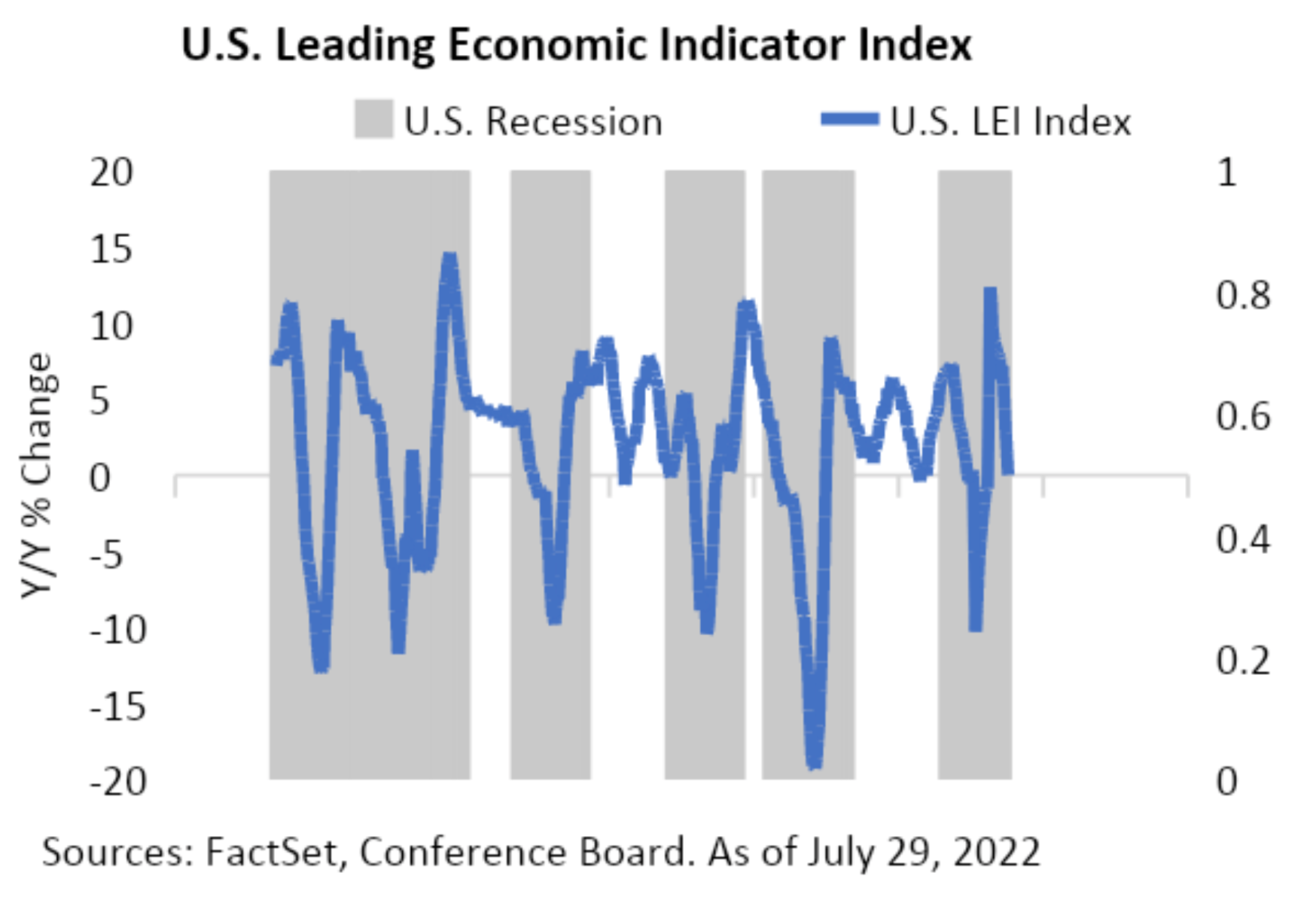 This report is intended for the exclusive use of clients or prospective clients of Fiducient Advisors. The information contained herein is intended for the recipient, is confidential and may not be disseminated or distributed to any other person without prior approval of Fiducient Advisors. Any dissemination or distribution is strictly prohibited. Information has been obtained from a variety of sources believed to be reliable though not independently verified. Any forecasts represent future expectations and actual returns, volatilities and correlations will differ from forecasts. This report does not represent a specific investment recommendation. The opinions and analysis expressed herein are based on Fiducient Advisors' research and professional experience, and are expressed as of the date of this report. Please consult with your advisor, attorney and accountant, as appropriate, regarding specific advice. Past performance does not indicate future performance and there is a possibility of a loss.

Use of Indices and Benchmark Return Indices cannot be invested in directly. Index performance is reported gross of fees and expenses and assumes the reinvest dividends and capital gains. Past performance does not indicate future performance and there is a possibility of a loss. See disclosure page for indices representing each asset class.

International markets were not immune to the sell-off in August. Like the Fed, the ECB has indicated its willingness to fight inflation, which will ultimately have an impact on growth in Europe. Furthermore, the conflict between Russia and Ukraine has created uncertainty as to the availability of natural gas to European nations given that Russia is the primary supplier. This has driven natural gas prices sky high this year, and electricity prices for consumers have followed suit (Europe generates approximately 13 percent of its electricity from gas). Electricity prices have doubled in recent months for many of the major European countries, which will undoubtedly likely impact consumer behavior. There has been an effort to switch to other energy sources to generate electricity (coal, nuclear, liquid natural gas), but there is both a time and monetary cost to making these types of changes. Currency moves were also a headwind for U.S. based investors holding international assets, as the U.S. dollar continued to strengthen against many major currencies in August.

Relative to domestic and international developed markets, emerging markets fared well in August, managing to eke out a marginal gain. Notable strength from Brazil was a key contributor (MSCI Brazil returned 6.4 percent in August). Strong commodity markets, a firming labor market and better than expected economic activity provided a tailwind for the country. 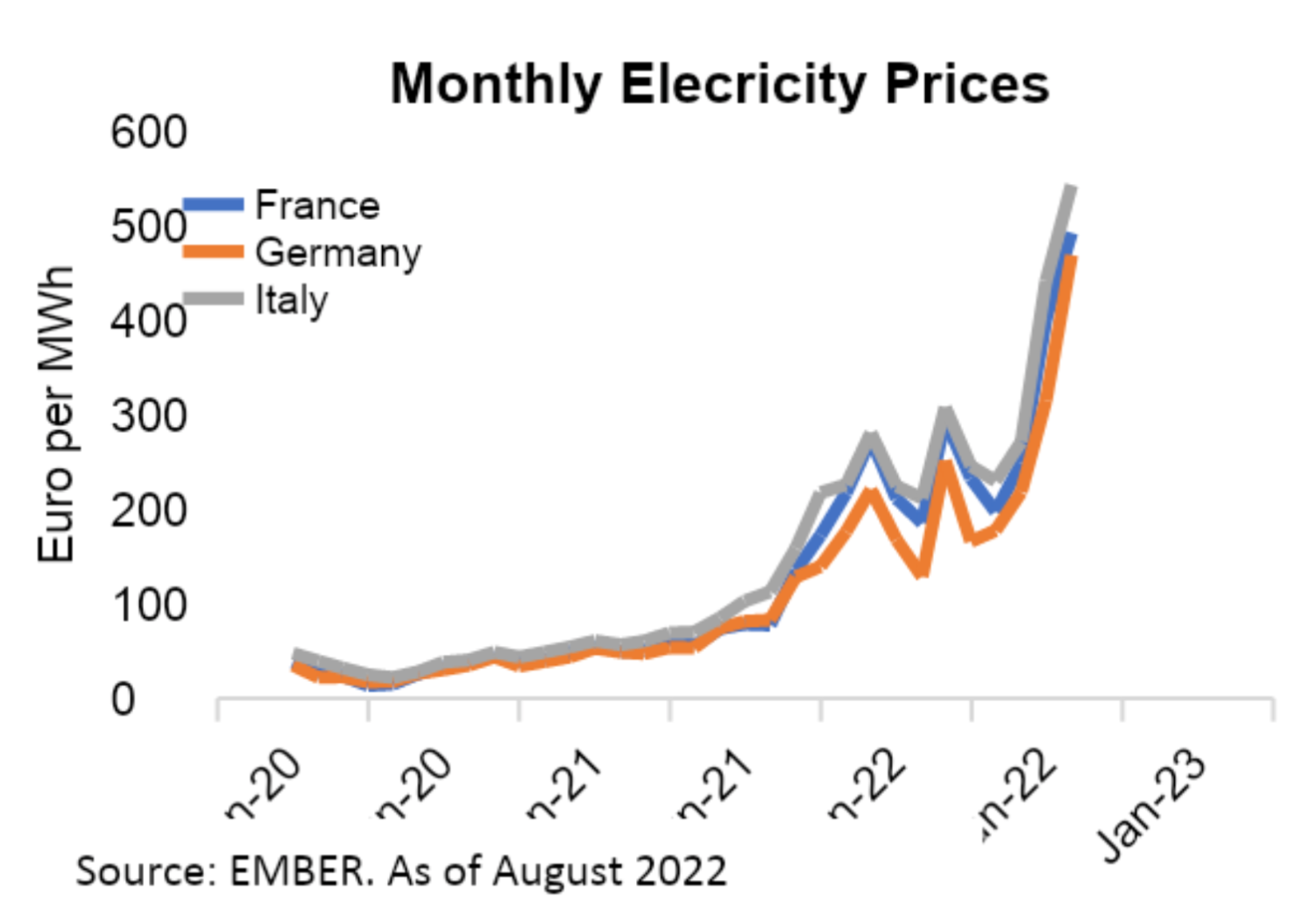 Fixed income markets saw negative results likely due to the wake of higher interest rates. The U.S. 10-year Treasury yield ended the month at 3.1 percent, roughly 50 bps higher than where it began. High Yield held up slightly better than the broad Bloomberg U.S. Aggregate Index, benefiting from higher coupons to help offset the negative price impact from rising interest rates. A reduced supply environment was also beneficial, and corporate credit spreads ended the month roughly where they began. As mentioned above, the U.S. yield curve remains inverted as the Fed continues on its tightening path, pushing short-term rates higher, while long-term rates remain anchored due to investor concerns about future economic growth.

Commodity markets were one of the few bright spots for the month. The energy and agriculture segments produced strong performance, while industrial metals lagged. Energy prices remain resilient, with notable appreciation in the natural gas market stemming from the uncertainty of supply coming from Russia. Drought conditions through the summer led to weak harvests which has put upward pressure on agriculture prices. Industrial metals faltered as investors grew increasingly concerned about the potential for slower economic growth around the world. 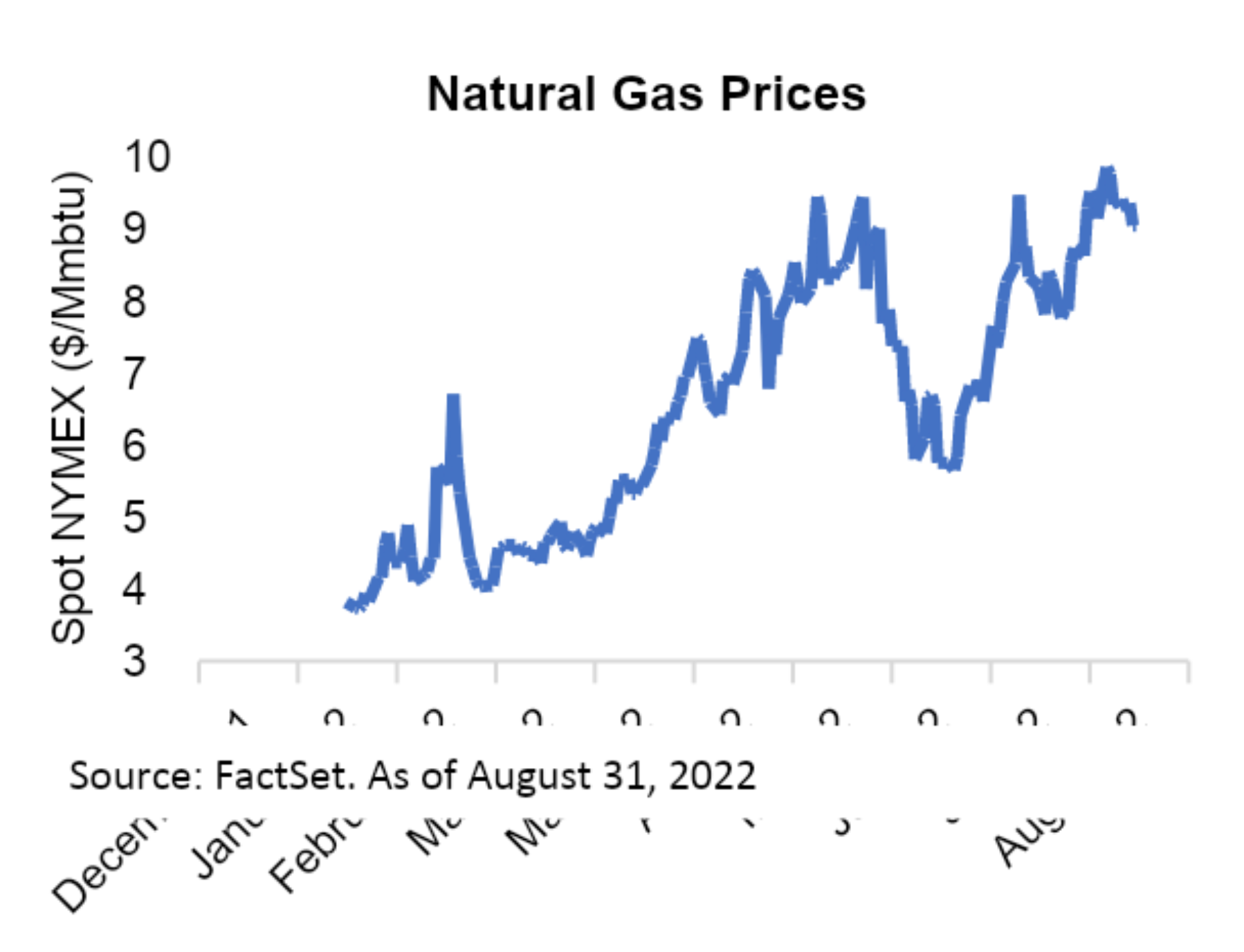 Investors continue to face uncertainty as we head into the fall months. All eyes are on the impact of the Fed’s commitment to fight inflation, even at the expense of the labor market and economic growth, and the September policy meeting will be watched with bated breath. Whether or not inflation has peaked remains unknown, but data suggests the worst may be behind us. There are signs of supply chain pressures easing. For example, the Baltic Dry Index, which measures the cost of shipping raw materials, has declined to levels not seen since the middle of 2020. That said, we are likely to continue to experience inflation levels above the Fed’s two percent target for some time and recession watchers will likely be keeping a keen eye on a moderating economy. As we highlighted in our Bear Market Field Guide, corrections and recessions, while often uncomfortable, are not abnormal. Maintaining a disciplined and long-term approach to investing, in our view, affords the best opportunity to achieve one’s long-term investment objectives.

For more information, please contact any of the professionals at Fiducient Advisors.

Comparisons to any indices referenced herein are for illustrative purposes only and are not meant to imply that actual returns or volatility will be similar to the indices. Indices cannot be invested in directly. Unmanaged index returns assume reinvestment of any and all distributions and do not reflect our fees or expenses.